It all began with the power and grace that only comes with incredible athleticism.  Decked out head to toe in the latest Salomon gear, effortlessly scaling the side of an impossibly steep scree slope on a mountain high above a stunning Lake District valley.  A moment that says “This is who I am. This is why I run”.  That was the picture that Men’s Running used to advertise Project Trail.

Enter four slightly less graceful and powerful hopefuls who, along with hundreds of others, answered that ad.  The four who, despite not being Ricky Lightfoot, were the chosen ones who had managed to convince the magazine that they had what it would take to be worthy of the awesome experience that Project Trail promised.  Suitably normal runners with the potential to do some relatively good things.  Under the guidance of coach, Robbie Britton, for each of them the next few months would change their running lives forever.

After being kitted out head to toe with some fantastic gear from Salomon and a shiny new Suunto watch, team Project Trail embarked on an intensive training regime, with weekly bespoke plans from coach Robbie, nutritional advice from Renee McGregor, regular jaunts with the Men’s Running crew and enough Twitter banter to fill the rest of their days.  The pro treatment came with pro results as Ross aced the Glen Coe 10k, Tim blitzed the Shoreham Woods 10k, Max outraced the whole of Cambridge on Strava and Mark decided to enter an ultra as preparation for a half marathon!

The work paid off with all four finishing in the top 40 of a 280 strong field during the Endurancelife CTS half marathon in Gower (which was not only steep but quite possibly the wettest and windiest event since records began, although that ‘fact’ has not been independently verified).

To say that Project Trail was a success is an understatement.  It gave all four runners the chance to focus on their training in a way that they never had before, a chance to shift their expectations and open their eyes to the things they could achieve with some serious focus and drive.

The difficulty was always going to be letting all of that go.  The question was always going to be ‘what next?’.  And so, as the Gower race came to a glorious end, Project Ultra was born.  A ‘does what it says on the tin’ goal to put down some serious miles and enter the gruelling world of ultra marathon running. 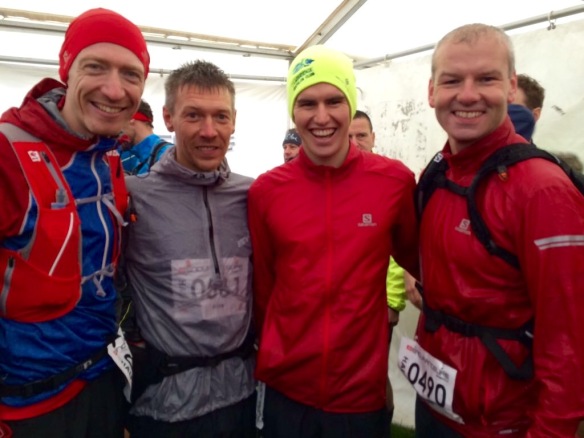